About the Seal of Saint Thomas Aquinas Parish 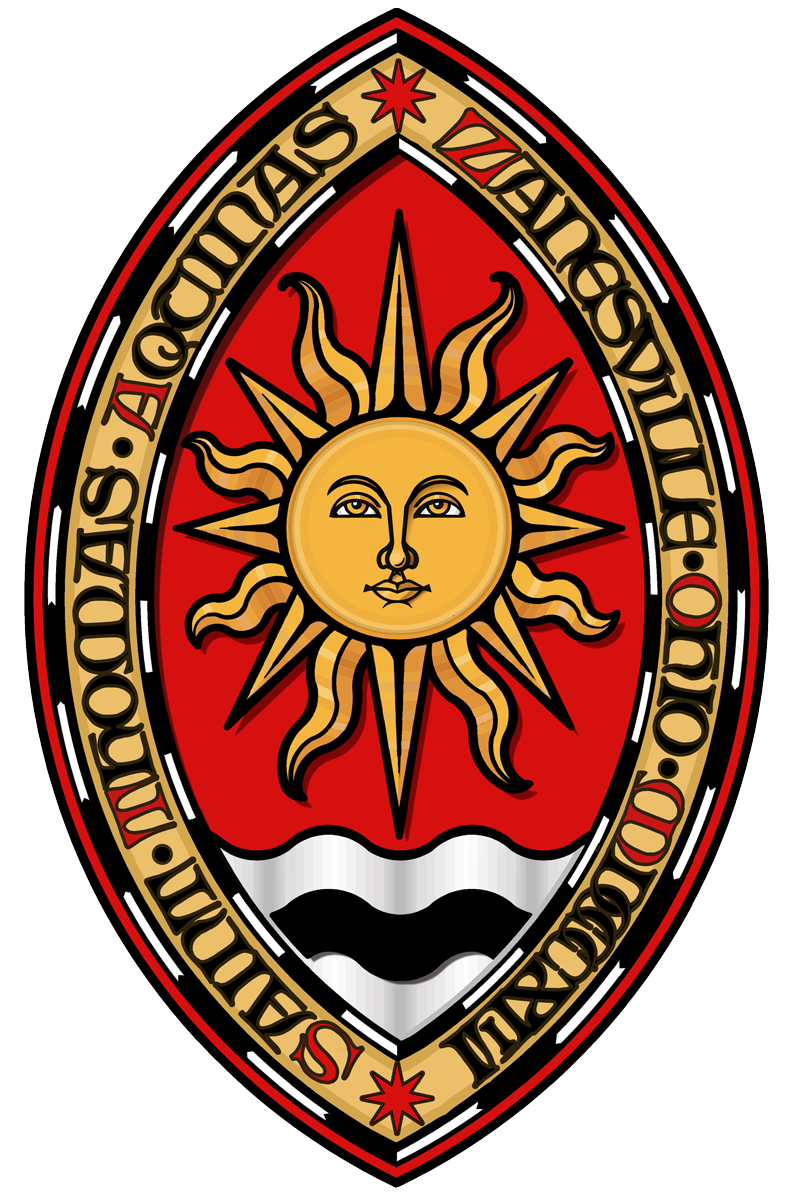 The vesical shape of the shield, taken from the parish's previous crest, is often used to designate the presence of the divine.  A vesica commonly surrounds depictions of Christ in Glory or the Assumption of the Blessed Virgin Mary.

The golden sun displayed so prominently in our new crest, on a red background, is also taken from the former parish seal.  The sunburst has been used as a symbol of Thomas Aquinas in Christian art for many centuries.

"The sunburst of Saint Thomas Aquinas, most certainly the sunburst over his heart, is a symbol of his teachings, which themselves illumined by divine truth, bear forth great light for the whole world. "Light of the World" is one of the titles given to him."

"Moreover, since true knowledge of God leads to the love of God, and since charity is properly depicted with fire and heat, the sunburst symbolizes the fire of charity which unites the believer to the Savior.  Filled with charity himself, Saint Thomas has instilled the ardor of love in the hearts of countless faithful."

"In another way, the sunburst can be considered as a sign of the purity of the Angelic Doctor.  It is well known that purity is a necessary virtue for any who would desire to penetrate the divine truths... And Saint Thomas was a most pure saint -- for one who lusts after the vain pleasures of the flesh cannot raise his heart and mind to the contemplation of the hidden mysteries of God."

The golden sun rises in the east over three wavy bars in alternating white and black.  The white and black recall the habit of the Dominican friars who served Saint Thomas Aquinas parish for nearly two centuries.

The wavy bars also represent the mighty Muskingum River on whose banks our forbearers built this edifice to the Glory of God for the re-presentation of the Sacrifice of Christ in the celebration of the Mass, and the extension of the reign of Jesus and his kingdom.

The seal is surrounded by the name of our parish and the year of the completion of our present church building, using the Roman numerals MDCCCXLII to designate the year of Our Lord 1842.

Even the style of lettering used in the seal has significance.  Reminiscent of English gothic script, it recalls the architectural design of our parish church which is modeled after the English Catholic churches of the Middle Ages and the neo-Gothic revival so popular in the middle of the 19th century.

At the top and the bottom of the seal is found an eight-pointed red star.  In Christian art the eight-pointed star signifies the Incarnation, the Eternal Word of the Father made flesh in the Virgin's womb.  The eight-pointed red star was also placed by the great Dominican artist, Blessed Fra Angelico, over the head of his depictions of Saint Dominic, the holy father and founder of the Order of Preachers.

Even as the seal seeks to give expression to a revitalized parish, it uses the Dominican symbols of our heritage in a new and bold manner to chart the future course of Saint Thomas Aquinas Church.

The parish seal was executed by Matthew Alderman.

Our parish traces its formation to 1819 and the great Dominican frontier priest, Father Edward Fenwick, later the first bishop of the new diocese of Cincinnati, who offered the first Mass celebrated in the town of Zanesville.

Shortly afterwards the small Catholic community purchased a brick warehouse where Mass and the other sacraments were celebrated on a regular basis, tended by the Dominican Friars from Somerset.

Quickly outgrowing the limited space, plans for a new church were drawn up and property purchased for its construction.

Finding the new church inadequate for the growing Catholic Community, in 1842 new plans were drawn up, as the now too small church was raised so that the present church could be erected on the same spot.