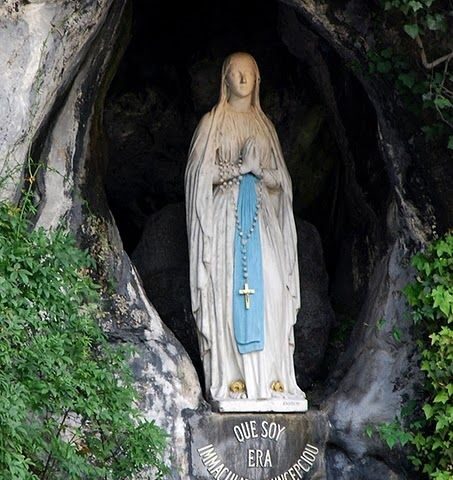 I went to Lourdes for the first time at the conclusion of my second year in seminary.  In those days the foundation of the second year of theological preparation was service to the sick.  As part of my preparation for priestly ministry I had been assigned to Washington Hospital Center as a student chaplain and participated in weekly Clinical Pastoral Education courses.  The courses were grueling, self-reflective group sessions which could often be quite brutal—so much so— that going and visiting serious and terminally ill patients in the hospital was a bit of a relief.

It was during those hospital visits that I came in contact with a wide range of human illness and suffering.  From simple surgical procedures to chronically and terminally ill cancer patients.  I visited them all during that year and offered to pray with them.  I was only thrown out of a room once, presumably because of the Roman collar I was wearing.

As the culmination of that experience I had the opportunity to go to Lourdes and make a retreat reflecting on my year ministering to the sick.  One of the religious sisters on the seminary faculty encouraged me to go, and insisted I be sure to take the bath in the famous spring waters flowing from the grotto of the apparition.  Her enthusiastic recommendation I found rather surprising as she wasn’t the type of nun who would seem otherwise enthused about apparitions and miracles.

I arrived in Lourdes mid-May, really before the pilgrimage season had begun in earnest, and remember the sense of quiet and solitude that enveloped the entire area devoted to prayer and care for the sick at the great shrine.  I stayed for several days, taking up residence in the City of Saint Peter, a youth camp/hostel, where young people from around the world visiting Lourdes could stay at a very reasonable rate, with dormitory accommodations and mess hall type cuisine.

Practically by myself, the days were filled with Masses, rosaries and solitude.  The other sites associated with the life of Bernadette formed a type of walking pilgrimage through the town, so during my stay I made my way to the old, abandoned jail that was her family’s home at the time of the apparition, the mill where her father had worked and where the family had spent her early years, the site of her birth, the parish church, the school Bernadette had attended and the convent where the sisters lived and where Bernadette took refuge after the apparition and whose community she would eventually join.  Each site had its own charm, and the spirit of the very simple, sickly, pious young girl who had difficulty remembering her catechism seemed to fill every space.

Each day was highlighted by several visits to the grotto where the Immaculate Lady appeared to Bernadette.  The ground before the grotto is covered with a terrazzo floor, decorated with crosses and stars, as I remember.  The pattern is interrupted by a simple square, whose mosaic inscription reads, “Place Ou Priait Bernadette le 11 Fevrier 1858” —The Place Where Bernadette Prayed the 11th of February 1858— Each visit I tried my best to get nearest that spot to meditate upon the rosary, as Bernadette had done, and gaze up at the little opening in the cave to rest my eyes upon the place where she had seen the Lady who is the Immaculate Conception.

Coming to the last day of my retreat, I still had not yet taken the bath, as Sister had so unexpectedly recommended.  Finally making my way past the grotto to the baths, I entered the section for men and waited for only a short while before I was admitted to the preparation room.  Removing my clothes, and wrapped in a very large and wet towel, I was led into the private area just before entering the bath itself.  Several men, speaking only French, ushered me inside and gave me instructions as to the procedure.  Taking me by the hands, they led me into the waters.  I was handed a small statue of Our Lady of Lourdes and asked to say a prayer.  I prayed the “Our Father” in French as all the gentlemen joined in.  In my heart, I was remembering all those sick and ill patients I had visited throughout the last year.  I remembered their sufferings and fears as I brought it all to the Mother of Jesus asking her intercession as I entered the waters of healing.  Quickly plunged under the ice-cold waters by my new sympathetic French friends, I was just as quickly placed back on my feet, then ushered to the dressing room where I dried off, retrieved and put on my clothing and was led back outside.  It all happened so quickly, but almost instantaneously a sense of great peace and love descended upon my soul.

Today, February 11, 2021, we celebrate the Feast of Our Lady of Lourdes and commemorate the World Day of the Sick.  It has been 163 years since Mary appeared to Bernadette eighteen times from February 11, 1858 to July 16, 1858.  This year’s celebration occurs during the pandemic which we have all been enduring for almost a year.  The changes we have had to adjust to.  The new priorities we have put in place.  The illness and death which has touched so many of us.  All of these we bring to the Lady who, when informing Bernadette who she was said quite simply, “I am the Immaculate Conception.”

Today I receive my first vaccination, how coincidental—no, Providential—I should receive it on this day.

From my heart to yours, in the hearts of Jesus and Mary,